NEW DELHI: Virat Kohli‘s 50th Test as India captain was very special, not just because of his incredible unbeaten knock of 254. The innings victory against South Africa placed him in third place on the list of Test captains, with the best success rate in Test cricket history, after 50 matches in charge.

India thrashed South Africa by an innings and 137 runs in the second Test to clinch a record 11th-straight series triumph at home on Sunday. India went past Australia’s previous record of 10 straight series wins on home turf and consolidated their number-one position in both the ICC Test rankings and the world Test championship points table. South Africa were dismissed for 189, after following-on in the final session of day four in Pune, as India took an unassailable 2-0 lead in the three-match series.

The victory in Pune was Kohli’s 30th win in his 50th Test as India skipper, giving him the third best success rate after Steve Waugh (37 wins after 50 Tests) and Ricky Ponting (35 wins after 50 Tests) for any captain after 50 matches. Kohli now has 17 wins in 23 home games and 13 in 27 away Tests. 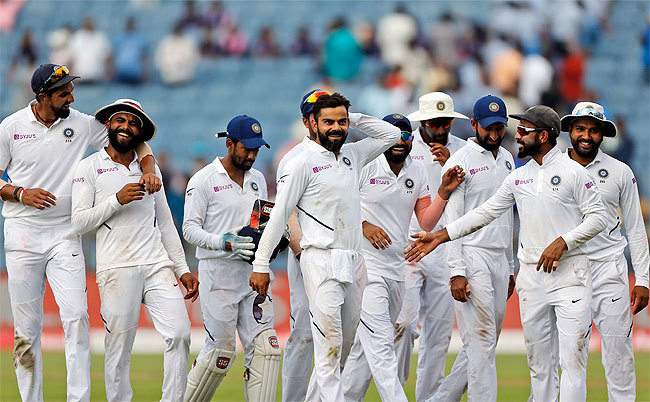 In the 57 Tests Waugh played as captain, he led Australia to victory in 41 Tests, lost 9 and 7 games were drawn giving him a superb win percentage of 71.92.

Ponting played 77 Tests as captain, led Australia to 48 victories, lost 16 games and 13 were drawn, for a victory percentage of 62.33. 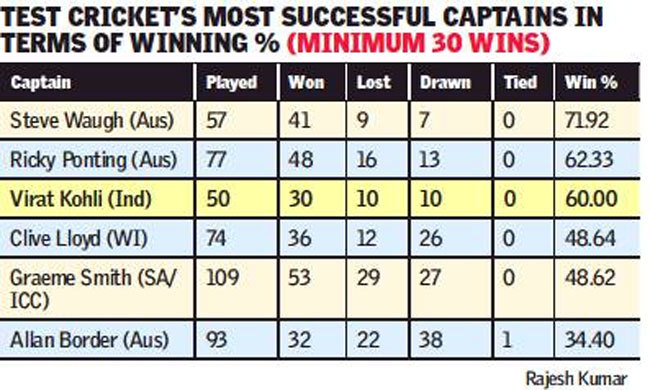 Man of the match Kohli set up the win with his unbeaten 254 — an Indian record seventh double-century. The match will also be remembered for Kohli surpassing Don Bradman‘s tally of 6,996 runs and breaking Bradman’s record of the most 150 plus scores as Test captain, with 9 such instances. Kohli now has 7,054 runs from 81 Tests. India have not lost a home series since 2013.

Kohli was handed the Test captaincy in abrupt fashion during the 2014-15 Test series in Australia after long-serving skipper Mahendra Singh Dhoni retired from Test cricket during that series.

India and South Africa now head to Ranchi for the final Test of the ongoing three Test series, starting October 19.

MS Dhoni Adds Jonga To His Collection Of Cars: Report