MUMBAI: With two World T20 tournaments coming up in 2020 and 2021 and the ongoing World Test championship cycle, there’s a lot on Team India’s plate. Coach Ravi Shastri puts things in perspective in an exclusive chat with TOI. Excerpts…

After an excellent series win against South Africa, what’s next on the agenda?

For the next two years, the focus will shift completely on T20s. The Tests are of course always around, especially with the new championship cycle in place. We have back-to-back T20 tournaments in 2020 and ’21. The amount of talent pool available in the T20 format is enormous. Tapping into that talent, giving the boys a good run — and not trying them out in some chop-andchange-way — will be the priority. We have to allow young talents a decent run and that alone can help us figure where true potential lies. So, once picked, a youngster will be pursued with.

There’ll probably be new selectors around, so the idea will be to sit down with them and chalk out the way forward.

India’s leading the Test championship cycle. What do you make of the cycle itself?


Right now we have a huge lead and that speaks volumes of how we have been consistently good as a team. I’d have been happier if the Test championship cycle had points for series win too. That’s missing. Let’s say if we’re looking at 120 points, 60 for Tests and 60 for winning the series — that would’ve been ideal.

A lot of people have a lot to say about Dhoni …


Half the guys commenting on MS Dhoni can’t even tie their shoelaces. Look at what he’s achieved for the country. Why are people in a hurry to see him off? Maybe, they don’t find enough talking points. He and everybody who knows him know he’ll be going away soon. So, let it happen when it has to. Making statements at his expense is downright disrespectful. After 15 years of playing for India, wouldn’t he know what’s the right thing to do? When he retired from Test cricket, what did he say? That Wriddhiman Saha was good enough to be handed over the wicket-keeping gloves. He was correct. He’s been a shadow when it comes to the team, always sharing his mind, lending his views.

The other day, he came over to the dressing room in Ranchi to meet Shahbaz Nadeem and had a chat — how motivating is that for a guy making his debut at home. Let me say this: MS Dhoni has earned the right to retire when he wants to. And let this debate end once and for all.

Does constant chopping and changing of a team help? Players, once given an opportunity, need to be given time to settle down…


The team management will ensure there’s a sense of security among the pool of players and we will also ensure that if there’s any lack of communication between the selectors and the players, the team management will step in and make sure that everybody’s on the same page at all times. Look at Rishabh for instance — it is my responsibility to get him back to his best when he’s struggling. I have the right to scold him when I’m unhappy as much as I’m sure I’ll give him a standing ovation when he does well. 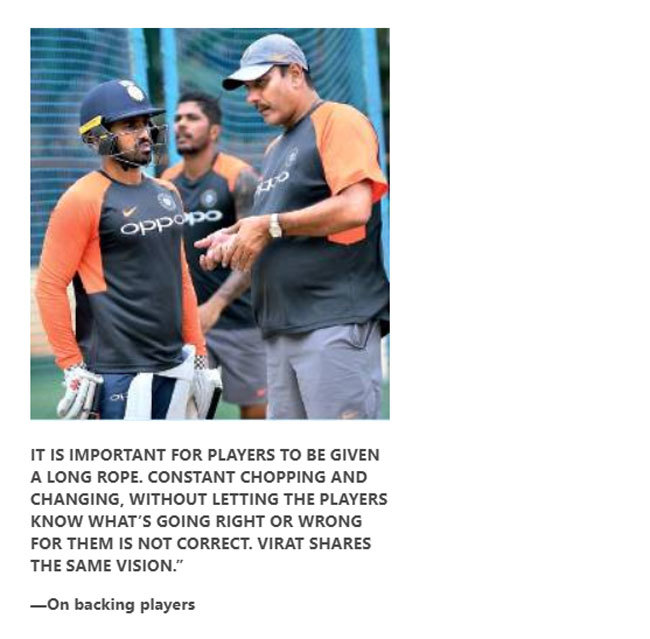 The point I’m making here is that it is extremely important for players to be given a long rope. Constant chopping and changing, without letting the players know what’s going right or wrong for them is not correct. Virat shares the same vision. And let’s not forget that one of the pioneers in pursuing this line of thought was Sourav (Ganguly) himself. He was such a great captain during his hey days primarily because he backed his men, trusted in their abilities. In return, they put their best foot forward. This is something the team management will take up with the selection committee. 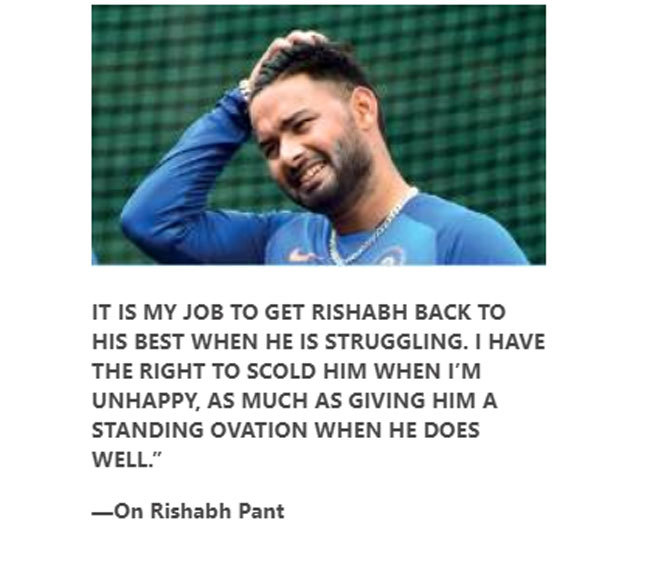 There’s less than a year to go for the World T20 and planning needs to start, fast…


The last time I spoke with TOI, I made it clear that T20 selections won’t be based on reputations. We’ll be looking at it very differently and as I said previously, I don’t see more than four or five players in the One-day team as permanent fixtures in T20. The path to finding the combination is already on, but make no mistake, T20 will be seen from a fresh perspective and a horsesfor-courses policy will be followed.

You pointed out the other day how the pitch was taken out of the equation against SA. No more dust bowls and turning tracks in India?


The last time South Africa came here, all the hue and cry surrounded the pitch. What now? We took the pitch out of the equation altogether. I’ve been saying this for a while now — taking 20 wickets is what matters. That’s what is required to win a Test match. Auckland, Melbourne, Johannesburg, Caribbean — we’ve never cribbed about pitches and made them the talking point. That’s why I said that day, to hell with this argument. We’re not going to bother ourselves with the surfaces. We have a team that can fend for itself better than most in any conditions.

That’s appearing to be the most exciting thing about this team. It’s not just about individuals…


Exactly. This Indian team is not just about a Virat Kohli or a Jasprit Bumrah or Rohit Sharma. It’s about the entire team, whether the guy is in the eleven or in the 15. Raise your hand and deliver — that’s been the motto. Umesh and Shami were outstanding and then we had someone like Shahbaz coming in and making this his own Test match. He’s been phenomenal in the domestic circuit. He’s picked up 400-plus wickets? Speaks volumes of the work he’s put in all along.

The whole team was happy for him that he could produce that kind of a performance in front of his home crowd and finish the game. There was some classical spin bowling from him.

Rohit seems to be comfortable opening in Tests…


What Rohit Sharma has managed in this series is phenomenal. He took complete control. When someone like Rohit finds this kind of confidence in a format, I’ll only say this: ‘Any opposition will be wary’. He’s potentially in the space that Virender Sehwag once occupied. The options were open for him, if he wanted to walk in as opener. It is something we had discussed a couple of years ago. He finally made up his mind to enter that space.

His ability to convert 100s into 200s is something we all know. At the top, if someone like Rohit finds his feet in Test cricket, and with a beast of run-maker like Virat to follow, what else can a team ask for? 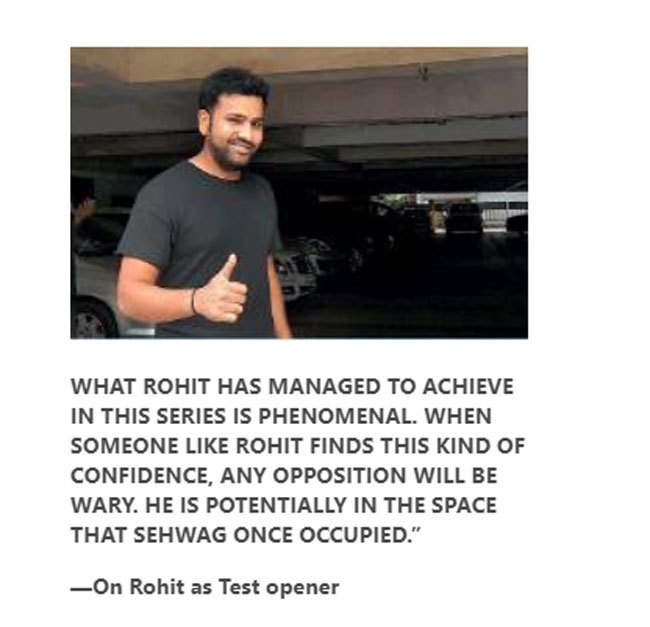 Sourav Ganguly is the new BCCI president. A big name like him taking up an administrative role can only be a win-win situation …


My heartiest congratulations to Sourav for taking over as the BCCI president. His appointment is an indication that Indian cricket is moving in the right direction. He’s always been a natural leader. When someone like him — who already dipped his feet into cricket administration four or five years ago — takes over as president of the BCCI, it’s a win-win for Indian cricket. These are difficult times for the Board and there’s a lot of work to do to bring BCCI back on the path of glory. I wish him all the best in his stint.

So, basically, you’re saying India should take from the ICC what it brings to the ICC …


I’ve always believed you need to bring something to the table to take something away from the table and in that, we know what India’s contribution is. Now, the question we should be asking ourselves is ‘Is India getting a fair return for what it brings to the table?’ I don’t think so, and in that, I guess lies the answer. I’m pretty confident our administration is now in capable hands and they know what to do.

You’ve been the director at the National Cricket Academy (NCA) before. What do you make of it in the present scenario?


The NCA is the most important institution in BCCI and you need it to be in the best possible functioning mode at all times. It is the ultimate preparatory school. With someone like Rahul Dravid at the helm there, I expect no less. We’ve been communicating a lot and I’m sure good things are waiting to happen. With Sourav as president and Rahul at NCA, what better combination can Indian cricket ask for?

Gopal Kanda: The man who wouldn’t be a kingmaker again | assembly elections

Everyone was sleeping at ‘Housefull 4’ special screening for celebs and the reason is Bobby Deol; watch the video for more details | Hindi Movie News

13 Years of ‘Don’: Farhan Akhtar gives a shout out to the cast and crew of the film on this special occasion | Hindi Movie News