Oh, the Galactic Empire gave the concept a go—twice, actually. Both literally blew up in their faces. The upstart First Order figured they’d improved on the concept by getting back to the basics: What’s the point in building a whole new Death Star when you can just stick a gigantic laser cannon in a planet? As we saw in The Force Awakens, that didn’t go so hot, either. 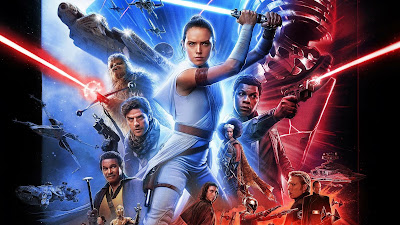 So (spoiler warning, though you learn about this next point in both the trailers and the second sentence of the movie’s opening crawl) Emperor Palpatine—recently dead but, through the miracles of galactic science and evil, still capable of a nefarious plot or two—has hatched a shiny new plan. And both First Order Supreme Leader Kylo Ren and wanna-be Jedi Rey figure prominently in it. The first will be Palpatine’s younger, more mobile avatar in the galaxy, the Emperor hopes; his spiritual son, if you will. The second will be—if all goes well—dead.

But as we’ve seen, Kylo Ren tends to have somewhat violent relationships with his would-be father figures. And honestly, Kylo’s not quite sure he wants Rey dead. She could be a powerful ally, he believes, if Rey could somehow be turned to the Dark Side. Together, they’d be unstoppable.

But Rey has no intention of joining the Dark Side. She’s got other things on her mind: finishing her Jedi training, protecting her friends and, oh yeah, saving the galaxy, too.

Death Stars may be a little passe in this new galactic era. But the Jedi … well, despite always seemingly on the edge of extinction, the old order still has life in it yet.

POSITIVE ELEMENTS For most of the movie, Rey stands as a worthy inheritor of the Jedi order’s lofty, altruistic goals. She’s the film’s primary hero, doing all manner of heroic things and risking her life in all manner of ways. She’s willing to sacrifice herself for her friends and for the galaxy, of course, but that’s old news: The ultimate sacrifice for her involves something a little more complex, and she shows a willingness to make it if she must.

But perhaps the thing most resonant about Rey’s story is that she’s more than just a warrior here: She’s a healer, and her kindness and willingness to help even threats pays dividends.

Of course, all of Rey’s associates—Poe and Finn and Leia and Chewbacca and many, many others—show off their own forms of heroism and sacrifice. Indeed, even droids sacrifice for their cause, and in strangely poignant ways.

The Force is still (ahem) a force in Rise of Skywalker. Though Star Wars: Episode I – The Phantom Menace offered a naturalistic explanation for it (midichlorians, as you recall), it acts and feels much more spiritual, and leaning heavily into an Eastern understanding of spirituality—a near-Taoist yin-yang sense of the cosmos. The Light and Dark sides of the Force are locked in eternal conflict, and we hear at least one reference to the Force needing to be brought “in balance.” (In practice, of course, the Light Side Jedi have always seemed pretty interested in conquering the Dark Side, which leads to a certain spiritual dissonance in worldview messaging, but we move on.)

That Force gives its users, both Light and Dark, a variety of impressive powers: The ability to levitate objects, fire off lightning bolts and, for the first time that I’m aware of, the ability to magically heal others. When those who are strong in the Force die, their corporeal selves sometimes vanish peacefully. They also have the power to return in a more ghostly form, offering advice and such.

We see Rey levitating with her legs crossed while meditating.

[Spoiler Warning] The Rise of Skywalker offers one more new twist here, however: We learn that all the Jedi (and all the Sith over on the Dark Side) who’ve previously lived and died somehow live within their still-living representatives. While meditating, Rey seeks to establish a connection with deceased Jedi in two scenes, repeating the phrase “Be with me.” She subsequently hears the encouraging Jedi voices of some who’ve gone before her from within her psyche—an idea that this film plays out in ways that previous installments have not.

A Star Wars: The Rise of Skywalker editor recently opened up about the truncated editing process, and how that put a strain on J.J. Abrams and the entire film’s production.

Maryann Brandon, who’s collaborated with Abrams on most of his projects (including Alias, Star Trek, and Star Wars: The Force Awakens), sat down with the Rough Cut podcast and opened up about the production process.

Brandon estimates the crew had three months less production time for The Rise of Skywalker than they did on The Force Awakens (for reference, she believes the team on The Last Jedi finished the film five months ahead of schedule). “It’s a struggle. It affected everything, obviously – the script, the art department, everyone in prep,” she points out, “About a third of the way through, Kathy [Kennedy] was like, ‘J.J. has got to spend more time in the cutting room.’ And I knew that just wasn’t going to happen. Not with the schedule that we were on. Not with what he was dealing with on a daily basis…he was just exhausted at the end of the day.” Brandon had a solution though – she suggested she cut on-set, inside a tent, almost always within 10 feet of Abrams.

It was an unorthodox solution, one that Abrams initially balked at, telling Brandon, “We don’t do it this way, Maryanne.” Brandon says she replied, “we don’t really have a choice,” and they moved forward with the idea, cutting on-set from the production tent and reviewing scenes in-between takes. “It was amazing, it was fantastic,” Brandon laughs. She maintains that the unusual production process actually boosted the confidence for Abrams and crew, and they’ll likely adopt that approach in the future. However, she also mentions that they were “definitely still trying to figure out a lot of stuff” before the deadline, which was the Monday before Thanksgiving.

When it’s discovered that the evil Emperor Palpatine did not die at the hands of Darth Vader, the rebels must race against the clock to find out his whereabouts. Finn and Poe lead the Resistance to put a stop to the First Order’s plans to form a new Empire, while Rey anticipates her inevitable confrontation with Kylo Ren.

However, the new editing method isn’t what fans and critics focus on when they discuss The Rise of Skywalker, which has been as polarizing as the dueling sides of the Force. Brandon believes the polarization is unnecessary, saying, “In a time when the world is so polarized, it’s not a film that should be polarizing.” But does she think the finale is full of fan service, as some have suggested? “Look, sure, it’s fan service and if you didn’t service the fans, it would be, ‘Oh, he didn’t go along with the history of Star Wars or what it all means,” she says, before adding that it was a “no-win” situation.

No doubt this will add fuel to the fire, with some critics and fans suggesting Episode 9 burned the Skywalker saga the same way Yoda burned the sacred Jedi texts.