Kennedy John Victor, better known by his stage name Vikram or Chiyaan Vikram, is an Indian actor and singer who is revered as a superstar in the Tamil film industry. In his latest film Kadaram Kondan Vikram plays a weapons and combat-trained mercenary who is a car hijacker. 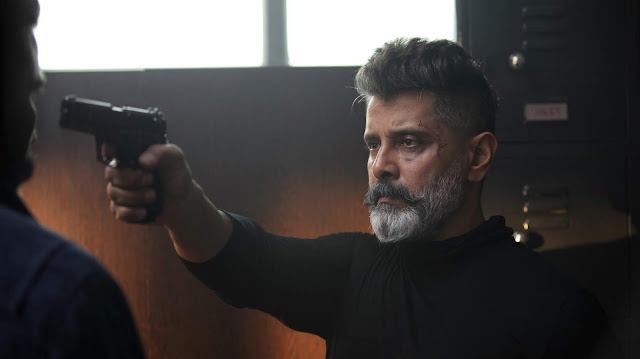 Upon finding the woman whose car he has stolen is in danger, he sets out to save her. Now playing in theatres all across the UAE, the thriller has been compared to Hollywood action movies by the lead star. Looking menacing in the posters with a salt and pepper look which he apparently styled himself, he says, “Kadaram Kondan is stylish, sleek, fast paced and at the risk of sounding a little confident, my persona in the film would definitely sit very comfortably in any Hollywood movie.”

Vikram, initially supposed to head down to Dubai for promoting the movie last week, didn’t share with us what had thwarted his plans to promote Kadaram Kondan in the UAE.

The film, directed by Rajesh M Selva, also stars Akshara Haasan and Abi Mehdi Hassan. We’re intrigued to see how Akshara does under the apprenticeship of her father Kamal Hassan. Fairly new to the limelight Akshara was last seen in Joyride (2018) in a supporting role and in Vivegam before that in 2017 which also starred Vivek Oberoi, Ajit Kumra and Kajjal Aggarwal.

Kadaram Kondan, produced by RKFI – Kamal Haasan’s home production – was written originally for Kamal Haasan himself but was then turned over to Vikram when the former got busy with his political career.

Doing his own stunts
The film is a two-hour action spectacle, and in a previous interview, Vikram had admitted to doing his stunts himself.

“I try and avoid using a dupe because my look and body language changes with every character I play,” he stated.

The 53-year old actor has come a long way since his debut in the 1990 film En Kadhal Kanmani, which was followed by a series of Tamil and Telugu films and supporting roles in a few Malayalam films.

He shot to fame about 20 years ago when the film Sethu turned the actor into a star after which anything that Vikram touched turned to gold.

Known for movies like Kaasi (2001), Raavan (2010), Iru Mugan (2016) and many more, the popular actor is fondly referred to as ‘Chiyaan Vikram’ and has had plenty of superlatives written about him in the past. He is a star, one with few parallels across film industries.

His strength is undoubtedly his ability to perform and it is also why he is always on the lookout for roles that challenge him. When asked about the role he portrays in Kadaram Kondan he said his character KK was morally ambiguous. “What primarily attracted me to KK was the shades of grey that he exhibited,” the actor states.

He refused to reveal more about the character. “I don’t want to say if he’s good or bad. That would be revealing the story and I wouldn’t want to do that.”

He molded the character to his own liking regarding his looks and demeanor and created something interesting. “Something to make this a very different film and that people would want to watch,” the actor adds.

On social media
Nowadays everyone is making a name for themselves be it through Instagram, Snapchat or Twitter. When asked how important it is to have a social media presence in today’s world Vikram said, “It’s quite important. And I did dabble a bit with Instagram. But after a point I realised it was taking too much off my time and attention. Time I could dedicate to my work. And so I’ve given it a break for a while.”

There is a huge UAE audience for Vikram’s movies. Considering films are a link for many expats to their home back in India, the actor’s message to his fans in the region was, “Visibility and recognition is a prerequisite any actor works towards. Every actor would love to have his work seen around the globe. So I always look forward to these little trysts abroad. Nothing like meeting fellow Indians in another country.”