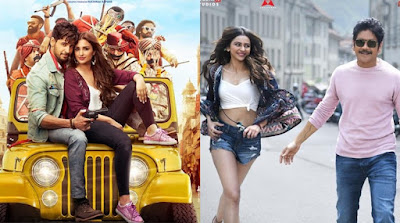 Jabariya Jodi and Manmadhudu 2 movie review: It is the season of romantic comedies.

Jabariya Jodi, starring Sidharth Malhotra and Parineeti Chopra, releases today. Directed by Prashant Singh, the film is a light take on groom kidnapping. This is Sidharth and Parineeti’s second film together after 2014’s Hasee Toh Phasee. The film has been written by Sanjeev K Jha. The film also stars Aparshakti Khurana, Sanjay Mishra and Jaaved Jaaferi among others. Elli Avram has a special appearance in the film.

Telugu film Manmadhudu 2, starring Nagarjuna and Rakul Preet, also hits the screens today. From the trailer, it looks like writer-director Rahul Ravindran has made a typical romantic comedy. Manmadhudu 2 is a sequel to Manmadhudu, which was one of the highest-grossing Telugu films in 2002. Manmadhudu 2 is the Telugu adaptation of the French film I Do.

Parineeti Chopra had said, “Hasee Toh Phasee had a cool, urban set-up. Jabariya Jodi is the opposite. It’s as desi as it gets. It’s as loud, larger-than-life and filmy as it gets. That’s half the reason why we signed the film because we wanted to come back together in the correct film but didn’t know what it was till Jabariya Jodi came.”

Sidharth Malhotra added, “It’s special to come back with a cast which has been loved before. There comes a lot of goodwill. But obviously, it’s not part two of Hasee Toh Phasee. It’s a different zone. There’s something new to look forward to. We are hoping the same crowd comes in and maybe there will be newer fans of me and Pari. We have put in a lot of hard work and effort into the film.”

They try to make it look as if the woman has a strong say in any matter, but that’s not to be.

A scene before the interval that’s meant to have some effect seems to have no impact on the characters, if their rather bland acting at this point is anything to go by; forget about the audience. The climax scenes are draining, as the characters change emotions like T-shirts.

Jabariya Jodi, despite attempting to take on social issues, is riddled with more problems than it can deal with. As always, the man decides for the woman, be it her lover or father. The women don’t have much of a voice, and men slowly take the centre-stage halfway through the film. This is even more frustrating, because the film seems to think it’s doing social service for all. For instance, there’s a scene where a eunuch blesses Abhay and says he hopes that he has a son. With full machismo, Abhay says Beta kyun? Beti kyun nahin?

Yes, very empowering, but going by the way women were reduced to background props, the film dilutes its own message. Most of the scenes of the film involve Babli just getting mehendi and haldi done and wondering about her eventual marriage. The relationship between the lead pair comes off as plain toxic, if not confused.

Sidharth and Parineeti had commendable chemistry in their previous film Hasee Toh Phasee. However here, it’s as if the film is entirely dependent on their pairing, and the actors seem to be crumbling under the pressure of trying to take the film forward.