Home » It is a War of the Greek Gods 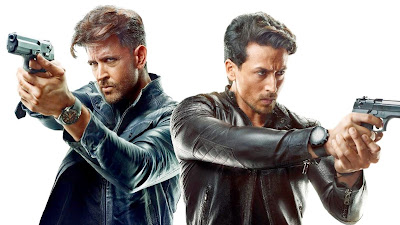 Director Siddharth Anand and Hrithik Roshan team up again for an action thriller after their last film, Bang Bang. This time around, Tiger Shroff is added to the mix too. The result? A story that entertains you with the measured predictability characteristic of a Hindi film- a true blue contemporary Masala-entertainer.

So, a super-qualified Indian intelligence officer Kabir (Hrithik Roshan) has gone rogue much to his senior Colonel Luthra’s (Ashutosh Rana) dismay. Who then is going to bring him to heel before he goes too far? Khalid (Tiger Shroff), Kabir’s protégé, volunteers to do the job because nothing can be higher than one’s love for motherland, not even the love and admiration for one’s mentor.

Things take an unpredictable turn as we follow Khalid in his attempts to piece together the mystery behind Kabir’s mysterious movements. And it is here that director Siddharth Anand and his writing team succeed in keeping the audience guessing. There are wheels within wheels and everything is not as it seems. A clever screenplay employing flashbacks and cloak and dagger twists work well.

The two action heroes Hrithik Roshan and Tiger Shroff set the screen on fire with their more than impressive acrobatics. Parvez Shaikh and Franz Spilhaus have designed and executed the action sequences with finesse, raising the bar in Indian actioners by quite a few notches. Hrithik Roshan bringing down a massive army chopper is one particularly well-choreographed sequence.

A special shout out to Roshan for returning to his Greek God avatar styled with age-appropriate savoir-faire. Shroff and Roshan make the perfect pair –almost Batman and Robin-like– with Shroff’s earnestness and admiration a good foil to Roshan’s wiser ways. Both actors turn in competent performances as per masala-film specifications, adding own little touches here and there. Shroff’s adoration and awe of his mentor, which forms the backbone of this saga, feels genuine and therefore lends heft to some implausible twists and turns. With his enviable martial skills Shroff has the chops to qualify for Hollywood actioners too. However, it is Roshan with his scorching on-screen gorgeousness that is likely to garner all attention for this film. This would have to be among the first multi-starrer in recent times that successfully displays great starry chemistry and hopefully, will pave the way for a return to more such cinematic adventures. Vaani Kapoor (Naina) the heroine of the film, comes in a small but significant role and is a confident presence on-screen.

If one were to pick holes in the film then it would certainly be the inordinately stretched climactic face-off between its leading men. And the background score does get a tad screechy and overbearing in certain parts. But otherwise, it’s a swimmingly good spy thriller with enough bells and whistles complete with top-notch production value, nail-biting chases through picturesque locations like Morocco, Malta and a super-ambitious scene set in the Arctic Circle!

War, which released on October 2nd, ticks against all the boxes of a blockbuster film. Given the massive collection on Day 1, the box- office battle is a war this film seems to have won already.

Soon after the release of the Hrithik Roshan and Tiger Shroff starrer War, online pirates have uploaded the full movie on piracy websites. This has turned out to be a shocker to the makers of the movie. Will this affect the box office collections? Let us know.

Farag to take on Kandra in opener The Peninsula

Stage set for final round of WorldSBK at LIC The Peninsula