Dream Girl movie review: A must-watch for Ayushmann Khurrana’s laudable performance and a heavy dose of laughter to break free from your boring and busy lives. 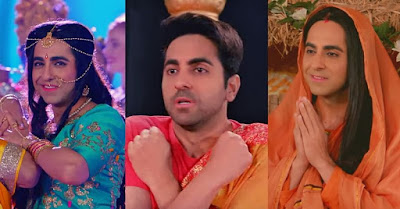 Whoever said you don’t need to take your brain with you while going to watch a comedy film, think again. Dream Girl is a far cry from run-of-the-mill comedies that try hard to tickle your funny bone but in vain. Directed by Raaj Shaandilyaa with actors Ayushmann Khurrana and Nushrat Bharucha in the lead, Dream Girl hits the bull’s eye being the laugh riot it was touted to be. Without trying to enter the league of ‘superhits’ or ‘blockbusters’, Shaandilyaa has put all he could into his directorial debut. A quirky and crazy comedy, Dream Girl makes you laugh endlessly, thankfully on genuinely hilarious jokes, and nothing lame or yawn-worthy.

The story starts with Karamveer Singh (Ayushmann Khurrana) as a child, unwillingly agreeing to play the role of Sita in his town’s Ramlila, and continues to do this even during his mid-20s. Popularly known as ‘Ramlila ki Sita’ and ‘Krishanlila ki Radha’, a jobless Karam lands a job at a shady adult hotline where women sweet-talk with lonely men. No prize for guessing it’s a night-shift job that pays handsomely. Used to impersonating a woman’s voice without any hesitance, Ayushmann turns Pooja and makes it look like a cake walk, instilling a sense of tough competition among other sari-clad middle-aged ladies working there.

And his regular callers — as an old man in the film says — covers a variety of characters. There’s a middle-aged drunk cop (Vijay Raaz) dying to unleash his inner poet, a young chap (Raj Bhansali) with a heavy Haryanavi accent and testosterone level rising by the second, a dejected-in-love man-hating journalist (Nidhi Bisht), his fiancee’s brother (Abhishek Banerjee) and the fifth one who is a game-changer — his own father (Annu Kapoor). Insane how these five characters fall head over heels in love with Pooja and want to marry her, Ayushmann at one point compares his plight with that of Draupadi in Mahabharata, and how it would have unfolded in the times of MeToo.

The very fact that the film stars Bollywood’s self-professed ‘poster boy for taboo subjects’, the most bankable star in recent times, and also the National-Award winning actor, was enough to put all the pressure on Ayushmann’s shoulders. And the actor deserves a pat on the back for effortlessly pulling off this tough act proving once again why he continues to scale heights. Each time he talks in the voice of Pooja, you actually pinch yourself to believe it’s really him! Dream Girl gives Ayushmann ample space and scope to perform. It’s him who leads the narrative and weaves the whole plot bit by bit. The ease with which he switches on and off from his character, he, once again, has hit the ball out of the park. You think Ayushmann should consider keeping ‘quirky’ as his middle name?

Finally shunning the ‘Punchnama girl’ tag or the vicious Sweety she played last in Sonu Ke Titu Ki Sweety, Nushrat Bharucha has convincingly stepped into the shoes of this demure yet modern girl, Mahi. Though her character gets a fair amount of screen time, including two songs, the way Karam and Mahi’s love story flourishes is a bit of a drag. Which girl accepts roses from a guy who she just called a stalker, and soon after, she is engaged to him. Living life in the fast lane or what?

The supporting cast consists of quite a stellar line-up. Annu Kapoor never fails to entertain, amuse and win hearts. Playing Ayushmann’s onscreen father, he often reminds you of their Vicky Donor camaraderie, which they take a notch higher in Dream Girl. Manjot Singh as Smiley, Karam’s best friend and partner-in-crime, gives major Fukrey feels while keeping his comic timing intact. Abhishek Banerjee and Vijay Raaz have a strong grasp of their characters that you can’t miss but notice their weird antics each time they are in the frame.

An entertaining screenplay makes for a fast-paced first half, which is followed by a rather long and slightly repetitive second half in which Ayushmann is only trying to get rid of this facade he has put on for long. How does he manage to do that without letting his love life go for a toss is what keeps you intrigued until climax unfolds. By this time, you feel the story could have ended a bit earlier. Nevertheless, Shaandilyaa manages to hold your attention with some great comic punches and subplots.

The director has put his writing experience of years penning scripts for noted comedians to its optimum use, and therefore, the overtly funny dialogues and comic one-liners give life to this romantic comedy. The seemingly preachy climax, however, with a message that won’t necessarily register in your mind looks a bit off-track. But Dream Girl, overall, is a winner for sure.

A must-watch mainly for Ayushmann’s laudable performance, and of course a heavy dose of laughter to break free from your boring and busy lives.

It is a War of the Greek Gods