Chhichhore Story: Raghav, son of high achieving parents succumbs to the pressure that comes with cut-throat entrance exams. As he battles for life in a hospital, his parents regroup with their friends after decades. Together, this older generation, goes on a nostalgia trip reminiscing their college days, hoping their bittersweet memories will help save a teenager, who has lost all will to live. 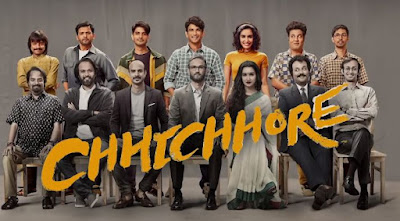 Chhichhore iReview:Stress and overwhelming anxiety is a reality for many young students in India. More so, for those who appear for highly competitive engineering and medical entrance exams. And the ones who do not make it through the criteria often find themselves in a whirlpool of doubt and depression. Unable to take the failure in the face of family and peer pressure, they often resort to actions which can cause irreparable damage to themselves and their families.

While this bleak reality is at the center of Chhichhore’s narrative, its heart and soul is purely reserved for the carefree college and hostel days that shape lifelong bonds and life lessons.

Annirudh (Sushant Singh Rajput), lovingly called Anni by his college buddies, and Maya (Shraddha Kapoor), a divorced couple find themselves in a desperate situation when their teenaged son, Raghav attempts suicide. The doctors indicate that he is critical, not just physically but mentally too. Annirudh believes the only way to bring him out of this darkness is to take Raghav down his own memory lane (back to his hostel days from engineering college). A place where he not just fell in love with Maya but also, forged friendships with ‘Sexa’ (Varun Sharma), ‘Acid’ (Naveen Polishetty), Derek (Tahir Raj Bhasin), ‘Bevda’ (Saharsh Kumar Shukla) and ‘Mummy’ (Tushar Pandey).

As the film’s narrative walks us down the hostel corridors, director Nitesh Tiwari creates an authentic world that is evidently filled with nuggets of nostalgia and a breezy, vibrant energy. There are some genuinely very funny moments that click but also be prepared for a generous helping of low-brow, frat boy jokes, all of which may not be palatable. However, there is no doubt that in its flashback mode – packed with romance, comedy, a sporting championship and some hard realities of hostel life – ‘Chhichhore’ soars. And when it zips back to the present day, where the group has an unlikely reunion, its heartwarming to witness that their friendship has survived the test of time and distance.

The arc of the screenplay though is mostly predictable and has a “Three Idiots” hangover. And with a lengthy runtime of almost two and half hours, the pace lags in the second half. It’s the emotional drama, fun quotient and a surprise element in the climax that keeps one invested.Shraddha Kapoor, packs in a solid performance both as the younger and older Maya. Sushant Singh Rajput shines as the young Anni (watch out for the scene where he goes tongue-tied in front of Maya!), however as the older Annirudh he seems a little uncomfortable. In fact, as the young lot – the performances are consistent – Varun Sharma steals the show in many of the scenes with his comic timing. Tahir Raj Bhasin is impressive as the intense Derek, Pratiek Babbar, Tushar Pandey and Saharsh Singh also enhance the film with their likeable performances. Together, as a group of friends, they have an easy camaraderie that’s relatable.

‘Chhichhore’ has a relevant message on the inherent attitude towards academic success and failure that will connect with many youngsters and parents of today. The film scores on many accounts and is certainly worth watching.
In-depth Analysis
Our overall critic’s rating is not an average of the sub scores below.