MUMBAI: At 47, nearly two decades after he first led Team India, Sourav Ganguly has climbed the next big step in his career. On Monday afternoon, Ganguly, along with BCCI’s secretary-elect Jay Shah and other nominated office-bearers, arrived at the BCCI office to file his nomination for the post of BCCI president, unopposed. The new team assumes office on October 23.

“First class cricket will remain my first priority,” Ganguly said, and also spoke of getting India its “fair share” at the International Cricket Council, tackling conflict of interest and repairing BCCI’s “tarnished” image.

With Bengal elections due in 2021, there’s immense speculation that Ganguly’s appointment is a political barter and that he could be projected as BJP’s CM candidate.

Between Saturday morning and Sunday night, ‘Dadi’ did what he does best. Got his way around and grabbed the most important seat in Indian cricket – the president of BCCI. 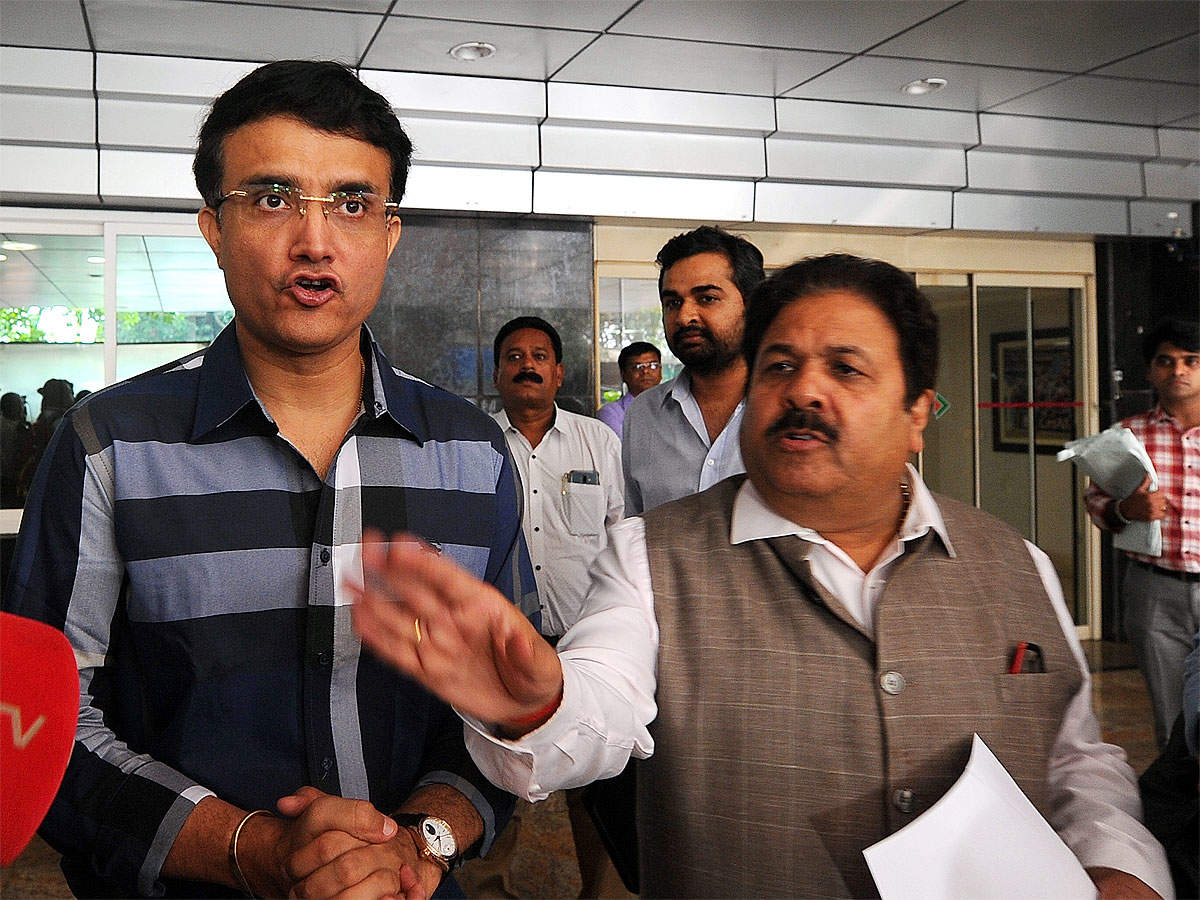 Setting right the image of the Indian cricket board and looking after the financial health of first class cricketers are immediate priorities of president-elect Sourav Ganguly. We haven’t received any money from ICC in the last few years, in the sense what we deserve. India generates 70-80% of the revenue. So, that’s going to be on the agenda,” he said.

Ganguly, for the time being, is supposed to occupy that chair for 9 months, given that his cooling-off period will begin as mentioned in the Lodha Committee recommendations.

“But you see, there’s quite a slip between …” say those tracking developments closely. “What if there’s a sports bill coming up or what if there’s a change in the existing constitution? You never know”.

You never know with Ganguly either. In a classic case of left not knowing what right was doing, the legendary India skipper who had just about got himself re-elected as president at the Cricket Association of Bengal (CAB) decided to throw his hat in the ring for BCCI top-job when he met Union home minister Amit Shah in New Delhi on Saturday. “That wasn’t expected at all and that’s so typically Sourav.

Once he threw his hat in the ring, he knew and so did most others that it would be difficult to ignore him. He’s Bengal’s most popular face and easily a handsome poach ahead of an assembly election,” say sources.

Now that the BCCI top job is his – one that he has bargained for – the bigger question doing the rounds in Kolkata is “which version of Dada will return to Bengal once the BCCI stint is over. The cricketer-turned-cricket administrator or a potential chief minister candidate?”

But that’s a question to be asked after 9 months. Now that he’s in the BCCI chair, one that he had set his eyes on years ago, probably when he first became CAB president in 2015, cricket alone remains the former lefthander’s foremost priority.

He’s started making the right noises already. “First-Class cricket will remain my top priority,” he said, a day after being nominated to the chair. And for someone who came through the ranks to play for India and has headed a state association for four years now, it was quite an understandable sentiment.

For a domestic circuit that sees close to 2000 matches every season and remains at the heart of India’s cricketing nucleus, it certainly needs to be a BCCI president’s top priority.

Fiercely ‘Indian’ at heart, there’s more than just First-Class cricket that’ll remain in focus though as Ganguly occupies BCCI’s most influential office. An upcoming bid to regain control of the ICC, connecting with his old teammate Rahul Dravid at the NCA, appointing capable selectors at the national level, resurrecting a talent search programme across the country and ensuring that cricket and cricketers remain the focus at all times will be among his many priorities.

“The thing with Sourav is, he always wants to remain involved. It keeps his mind ticking. He doesn’t mind multitasking. One thing is for certain: His stint won’t be boring,” say those who’ve watched him grow as an administrator.

A prodigy of the late Jagmohan Dalmiya, BCCI’s most enigmatic former boss, Ganguly knows how to walk that path. “He’s ambitious, which is not a bad thing. What works for him all the more is he knows his cricket,” add his supporters.

In fact, that’s the very nerve in him that first brought him into focus for all the talk surround conflict of interest. “Interests, you see. He’s got plenty,” has been the standing joke.

It’ll soon be known what all Ganguly will have to give away for the time being to occupy the all-important chair. He’s the president of Cricket Association of Bengal – the post he will most likely hand over to Avishek Dalmiya; member of the Cricket Advisory Committee – which is now defunct and the head of BCCI’s technical committee – which needs to be restructured.

From Deepika Padukone-Ranveer Singh to Priyanka Chopra-Nick Jonas: Bollywood celebs who will be celebrating their first Karva Chauth this year